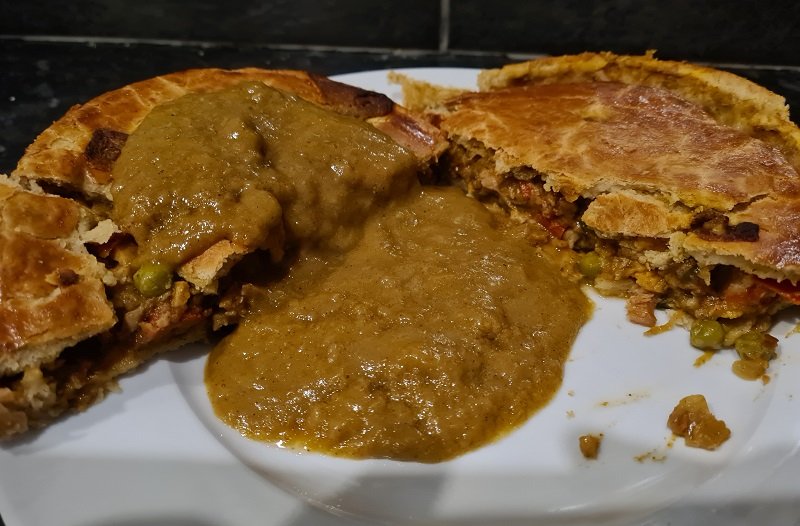 Now then. Time for a little something different. A mate of mine, Johnny Stafford, who acquired my previous book, the Life of Pies, some years back, had a neighbour who makes his own pies.

What started as a hobby turned into a passion with Steve taking them into work for his colleagues to try. I have got to say I’ve tried five of them now and they are all fantastic. The man has a talent!!

Here is a review I did for Steve’s steak and veg pie, which was the first one I tried: Steve’s Steak and Veg Pie

I have actually eaten three more different ones since then, with the tasting notes saved somewhere but while this particular one is fresh in my mind, let’s dive in…..

The first thing that takes you back is the size and weight of it. In truth, it is possibly enough for two people. But the first rule of pie club is that WE DO NOT SHARE PIES!!

This also rules it out of entry to the British Pie awards, not only because it is not commercially available but as Steve has confirmed it is over the regulation 600 grammes in weight.

Being a professional, well, a dedicated amateur, he has been in touch throughout, checking on the status of the pie. What with it being in his freezer for a few months due to lockdown, then also in mine for several months, Steve was concerned the pie might no longer be at it’s best. I can confirm this was not the case, it was absolutely fantastic, in many ways, just like all of his efforts.

The pie is of a familiar shape, flat sided with a sturdy top crust. You may notice that the top crust has fallen away a wee bit at the sides, probably due to minor freezer degradation. However, after 20 mins in the oven, the texture is perfect, with that all important crunch I’ve so missed*, clearly evident. Closely followed by a softer, doughy shortcrust interior which is gently infused with the moisture from the filling. 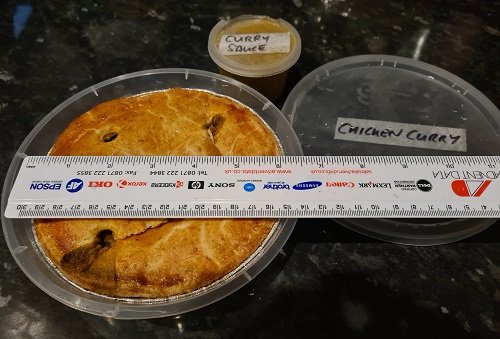 *Yeah I did the whole “it’s January, best get a few pounds off after consuming three times my bodyweight in food, alcohol and snacks over the festive period”. Sorry.

As for the filling, well it is packed to the rafters with chicken, peas, onions, peppers and herbs, all mixed in with a lightly moist gravy. That alone, is arguably enough, but Steve kindly provided me with an individual pot of home made curry sauce to pour on, which he makes using the juices from the meat.

The curry sauce is out of this world, it knocks most chip shop curry sauces into a hat, and it has a fair kick to it as well. I pour it on half to try and get a with/without taste but basically end up dipping my fork in it throughout. 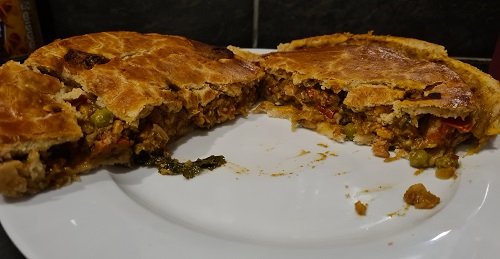 The whole pie is cleared up in a matter of minute but it is intensely tasty and satisfying. I have mentioned previously that these pies would go down a storm if they were made commercially, Steve like most of us, has a day job to contend with.

So in the meantime, all you can do, is join our Facebook group or get in touch with me, and beg him to make you one if you are based in the North West. They are WELL WORTH IT, trust me. 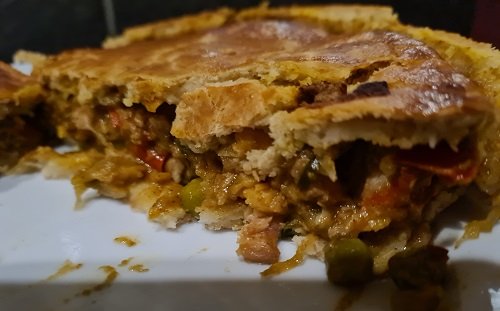