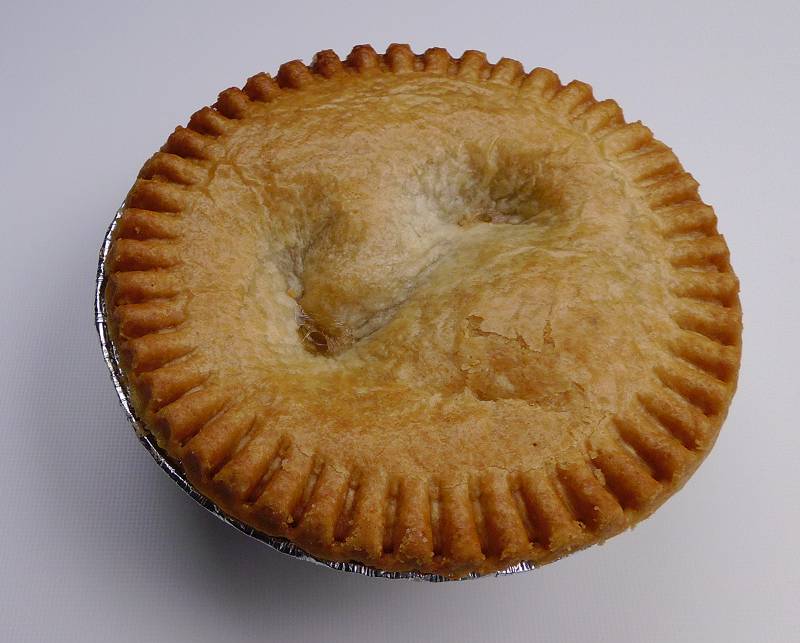 Today we go right back to the start. To be honest, we had been reviewing pies informally for years in the fanzines I was involved with but Monday 16th January 2012 was the first day that I consciously went out to buy a pie and review it.

It took place in one of the poshest areas of Knutsford, close to where I was working at the time and I am lucky I didn’t get arrested. I visited a Hampson’s Bakers in the town, subsequently re-branded as Sayers. They also include the Pound bakery in their stable, more on them later.

Enjoy, as your then thirty-something pie reviewer made his first foray into (semi) professional pie eating, totally unaware of the monster he was about to unleash….

I’m sat in my car in a leafy lane near Knutsford town centre. I have carefully assembled a digital camera and have got a white chopping board laid out on the passenger seat, with the box underneath to prop it up level to the seat’s curvature. There’s a load of white van men working on a big house across the road and a postman has just walked past, whistling. Because all postmen whistle.

I lay the pie out on the chopping board and I produce a large shiny carving knife out of my Asda bag, lift the pie out of it’s foil tray and proceed to sever it in half with one almighty, glee-filled blow. Just as a pair of ageing pedestrians walk past with their dog.

Those are the words ringing through my head right now. I’m not right in the head am I, let’s face it? This is ODD behaviour; or at the very least OCD behaviour. It makes perfect sense to me though: this is the first stage in a quest I have believed in for quite some time now.
It is the duty of a Wigan man to sample as many pies as is humanly possible from around the world.

I want to find the best there is. It may be in my home town of Wigan, or further afield. I need a plan, a map, an understanding wife and some healthy working organs. Can I travel the UK, albeit ever so slightly skewed towards the North to find and review the best pies and try and find the ultimate pie? It’s time to find out…..

My first review is in Knutsford near work. It’s posh. The local MP is George Osborne. This might well be where he comes when he wants to rough it and stick a meat pie down his grid. I doubt it though.

It’s nearly 1pm when I wander in to break up the chit chat as two ladies turn and stand to attention.
“I’ll have a meat and potato pie please”

You’ll be hearing me say that an awful lot. It’s my staple diet for 700 days, although I’m prepared to mix it up a bit in the interests of research. I mean they do a CHIP SHOP CURRY PASTY in here for God’s sake, who wouldn’t want one of those?

There are a range of pasties from chicken tikka and cheese and onion but it’s the pie I’m after, which comes in a Sayers wrapper. Confused? Hampsons are part of the Sayers group and they also own the Pound Bakery (more on them later). They have sensibly opted to retain their prestige brand name for the residents of the Tatton constituency mind you.

Place: 7 I get a smile which is a start! Attentive and seemed genuinely pleased to see me. They offered me a fork which blotted their copy book a bit mind you.
Pastry: 7 The pie possesses perfect portability and holds together throughout. The crust edge is a tad thick, which often sets the heartburn alarm bells ringing, but the whole pie is eaten by hand and there is zero, I repeat zero spillage
Presentation: 7 It’s scorching hot like a hand grenade, yet once the foil tray has been dispensed with, it’s almost the perfect room temperature to chomp into
Package: 8 A deep mix of meat and potato chunks, full to the brim with hardly any airspace
Palate: 7 This lot churn out the pies by the van load so it’s a quality, solid performer if a little generic
Price: 8 Slightly above average sized pie for a slight below average price
Portion: 7 A standard size
OVERALL: If I had the best pie in the whole wide world first, it would be a very short book. The Hampsons pie is a good, solid performer but not spectacular. It sets a benchmark that some will exceed but many will fall short of and gets a respectable 51 out of 70 marks.
Now, I need to get a plan together…..

The finer details:
The original review took place on Monday 16th January 2012. Hampsons (now all Sayers branded) continue to have a range of shops across the North West stocking a wide variety of pies, pasties and probably some more healthy stuff, we’re not going to plug here.

Little known fact: Some time after publishing the Life of Pies, I was approached by a marketing consultant to do some work with them and become the face of Sayers / The Pound Bakery. I politely declined as it may compromise my impartiality. Looks like they went with Ken Barlow instead.

Current pricing (Jan 2021):
You can expect to pay around £2 for a fresh, hot meat and potato or steak pie from Sayers these days, though prices may vary slightly.

Website: Sayers the bakers
Twitter: @sayersthebakers
Facebook: Sayers the Bakers
Click here to add a pie review of your own: https://goodpieguide.co.uk/add-pie/
You can buy a copy of Life of Pies here for just £4.99 plus P&P