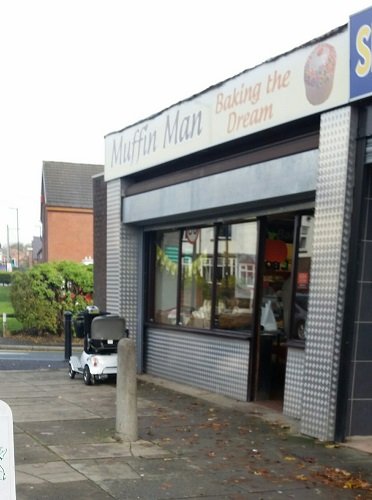 This was the second pie I reviewed in Life of Pies, and being within a mile or so from my house, it is a pie that I have sampled many times before and since. At the time, I was operating incognito, with not even my good lady wife aware of my plan to eat hundreds of pies, therefore the need for discretion was paramount.

Let me put this out there: Muffin Man make great pies. However, being based in Wigan means that they are situated in one of the most cut throat pie markets that there is. Maybe I was a little bit harsh at the time, but they are certainly a good match for a Galloways or a Bowens on their day.

It’s highly probable that blood has been spilled over the debate as to who makes the best pies in Wigan. Or pie gravy at least. This is why the question needs answering. Not a week goes by without some 500 reply thread on Facebook over whose pies are best in some of the more feverish Wigan Facebook groups. There is real passion and dare I say anger over this at times, like when Italians get talking about football.

There are people who swear by the Muffin Man. Plus it’s in my village so giving it a shit review will see me ostracised by my local community and earn me the nickname “that pie wanker”.

Going to keep it simple and local for now. First, lay the trap:

“Right darling, going getting my hair cut, then I’m getting some petrol. Fancy a pie for dinner?”

It needs to be a local one given we’re going out for the afternoon and I’m still operating incognito but there are some big hitters within the confines of WN6. I don’t want to crown a king in the first few pages but I envisage at least one or two Champions League places for Wigan pie shops when judgement day arrives.

The beauty of this land of ours is that you can be anywhere in the country by lunch time if you get up early enough but, just for today, my local pie shop will have to do.

When I was a kid growing up in the Springfield area of Wigan, there were at least four pie shops within a few hundred yards of my house. I’m left to lament D&J Wilcock, Lyons and the Gidlow Bakery, however the Muffin Man of my childhood, remains intact on Park Road.

It’s a traditional bakers with several branches in Wigan. As the name implies they do lovely, fluffy muffins in packs of six. These are known in Wigan as barmcakes. Known elsewhere as cobs / rolls / baps / teacakes / breadcakes and the source of pithy regional internet arguments everywhere.

There’s also pasties, chunky steak pies and breakfast items, and chicken and mushroom pies, the latter of which I often decline, on the basis that I refuse point blank to eat anything that grows between your toes. This is a phobia I will have to conquer in the coming months.

For today, I manage to procure the last three meat and potato pies on the shelf.

“Put some more pies in, these have run out”

It’s barely eleven in the morning! Only in Wigan! 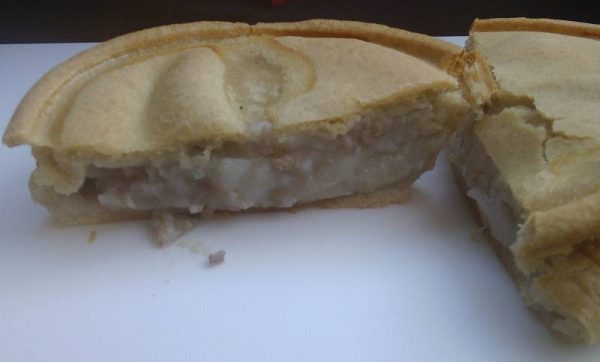 Place: 8 Brisk and brusque, the Wigan pie woman in action is truly an art form to admire
Pastry: 9 Firm enough that the crust doesn’t crumble in any way, yet softer than the dulcet tones of the Cadbury’s Caramel bunny. Heavenly.
Presentation: 6 Not very warm but this was acknowledged
Package: 8 Densely packed potato bound with mince in a mash. Heavier on the potato than meat but plenty in there
Palate: 8 The mince is pinkish but deliciously tender and it is a proper Lancastrian pie with sloppy potato filling oozing all over
Price: 8 Two options to serve different appetites works for me
Portion: 8 I mean who on earth orders a small pie when there’s a large one on the menu?

OVERALL: 55/70. I’m parked up at the side of the road, whilst talking into my phone like an Apprentice candidate. A paperboy walks past looking at me oddly, as I narrate this review Partridge-style. As I said: Pies are serious business. An early contender.

The finer details:
The original review took place on Saturday 21st January 2012. (where did those nine years go!) I have eaten enough of these subsequently to verify the above account, and yes, they are usually served piping hot. They also do a lovely line in pork pies with accompaniments, such as pork with apple, black pudding or chorizo.