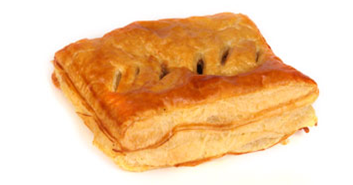 aka How not to buy a pie down South

A simple enough question I thought. It might get you a funny look if you walk into a bakers in Wigan and ask that question, seeing as you are likely to be confronted with racks of the buggers.

The pie lady, and I’m not being sexist here as it nearly always is a lady, might think you’re being a touch sarcastic you see. When up North, you’d have to offer some variation along the lines of:

“Have you got any pies left?” or a more genteel

“What pies have you got left?”

Both acceptable, albeit the second can show you up to be something of a pie novice in the jungle that is a North West pie shop if you cannot decipher the product line on sight alone.

I digress. So we’ve established it’s a bloody stupid question to ask in a bakery in the North West of England. However, it also garners an equally profound “have you just been beamed down from outer space sunshine” type expression should you venture that query forward in certain other parts of the country.

I’m in Poplar. Cockney country. Within the sound of Bow Bells, not that I can hear them today. It’s February: still freezing, still snowing. I get off the tube at All Saints and wander through Chrisp Street Market in search of a Percy Ingles bakery, famed throughout East London and Essex. The irony here, is that I practically have to walk past a pie and mash shop to get there, I need to get my product and move quickly, but I’ve not ruled it out for a visit another time, even though it looks like I’d get stabbed as soon as I walked in and opened my mouth.

I find it easy enough with it’s bright green frontage in the precinct within the market and wander in. It’s a bakers right? Just like thousands of others up and down the country – they MUST sell pies?

It might be the accent, I don’t know, but each time the Eastern European girl serving laughs a little louder, until she is openly cackling in my face like one of those double crossing Russian bond girls. She repeats the last word “Pies?” eventually adding a “no, no” at the third time of asking as if I’d just walked into a launderette by mistake and asked for a short back and sides.

“OK I’ll have a steak bite then” 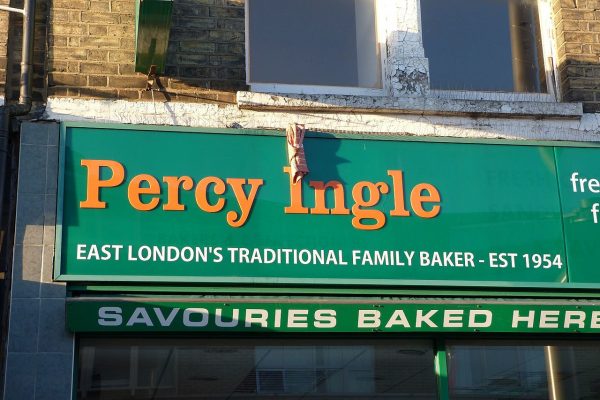 Some climbdown. A sheepish retreat but I need summat to eat. It’s bizarre. She looked at me like I was some kind of madman. You know what a pie is don’t you? There’s a sit down type shop flogging it with mash around the corner?

It seems that in the East End of London there are rules: bakers sell bread, cakes and a selection of puff pastry type savoury products. If you want a pie, you go to a pie and mash shop and never the twain shall meet.

Far be it for me to question it, even though they then go and put eel liquor instead of gravy on their pie and choose to have the potato on the outside. I’ve learnt the hard way. Despite an aversion to fish, mushrooms, peppers and all other kinds of things which are probably good for you, I fear I may have to try a pie the Cockney way some time soon. In the meantime, I settle for scoffing this steak slice/bake/bite/pasty whatever they call it.

Service: 7 Because she was pleasant enough even though she was dealing with a Northern simpleton

Taste: 8 I was taken in by this, it was actually steak

Value for Money: 6 London prices, what do you expect?

Warmth: 6 I’ll give it the benefit of the doubt on a cold day

Size: 8 yeah I’ll give them that one, not as deep as a pie but a hefty sized slab of pastry

Postscript: Your intrepid adventurer did eventually seek out at least half a dozen decent pie shops in and around London and even savoured the delights of eel liquor as an accompaniment

Sadly, upon checking out Percy Ingles, it seems that they have permanently shut the doors of their 66 shops in recent months: Percy Ingle closing is another blow in working class London’s fight against gentrification (inews.co.uk)

Upon reading the above piece, it has had me rueing the fact, I have never tried a Tottenham cake and never will. But for those interested, here is a picture. If they don’t sell them at White Hart Lane, then they absolutely should do….. 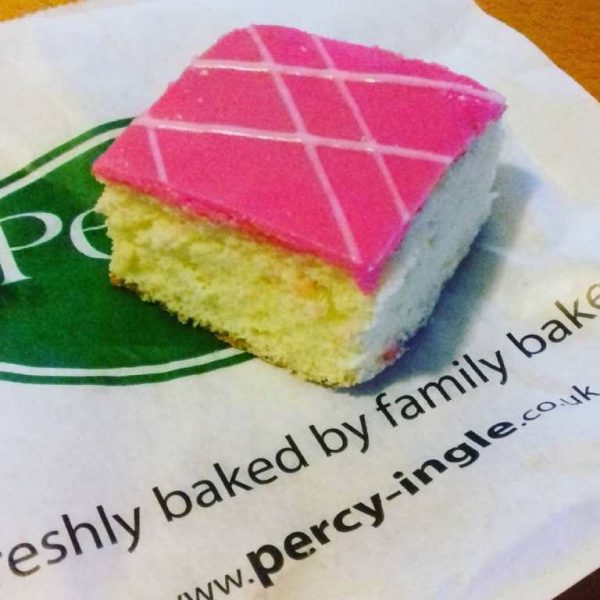 I may not have been too happy that I couldn’t order a pie in their shops, but the fact that a traditional baker of many decades standing has shut down is indeed a sad day.

PS If you are in the area and have a hunger to sate, then the actual pie and mash shop on Chrisp Street is called Maureen’s pie and mash. They actually do home delivery. Hmm I wonder: https://maureenspieandmash.co.uk/