I bought these a while ago and was that underwhelmed that I never bothered to pass on this information. My guess is I bought them in June to coincide with the Champions League final, given the branding

I like crisps almost as much as I like pies, beer and hot curries, so I felt duty bound to give them a whirl.

To be fair, it says on the packet, that it contains flavouring only, not any actual pies. It would be quite the trick to manage that in the first place. However, seeing as the content is in a fully encased package, then it is perhaps more of a pie than some of the barely pastry-clad sights that come across my timeline on a daily basis. DON’T GET ME STARTED AGAIN!! 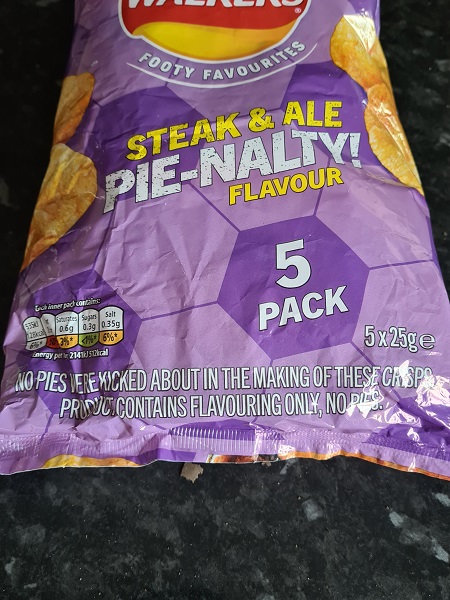 Upon opening the bag, I get a faint whiff of what Walkers used to call Steak (Beef?) and Onion, with not quite the kick of a chargrilled steak Max product. The crisps are golden coloured but lacking in any visual signs of seasoning.

The crisps are of standard Walkers size (I find them a bit flimsy these days compared to some of the posh, gourmet crisp makers out there but they are still the market leader, so why change a traditional brand?)

I suppose at this point, there are only three tests:

That’s a story for another day, or one to read about it in Life of Pies

Having said all that, I’m a sucker for trying a new crisp flavour, so I don’t want to be too harsh. In fact, I’ve just seen they are doing a beef madras flavour. I’ll be having some of that. Only problem is that, if they aren’t very good like this flavour, I’ll get bollocked for sticking the other bags in the kids’ lunchboxes….

Oh and PS, I don’t normally pour a bag of crisps on to a plate before eating them, what on earth of a monster do you think I am??